We finally have some real news to report on Breaking Dawn!! But first, a public service announcement:

HOW TO STAY INFORMED ON THE TWILIGHT SAGA

We continue to be inundated with messages, emails and tweets, asking who is directing Breaking Dawn, who is casting it, where it is shooting and when auditions are taking place.

As we’ve said before, we’re unable to answer all these questions individually, or we’d simply have no time to, you know, earn a living! We do have a casting company to run, after all. 🙂

For the time being, we have nothing to do with Breaking Dawn and there’s no guarantee that we ever will. It all depends on when and where it shoots and who is hired to cast and direct. None of this is in our hands, unfortunately, and we cannot reply to everyone who asks one by one.

Here’s the best way to keep informed about anything we do learn regarding the Twilight Saga. Anything we find out will be reported in these five places first:

3. The Casting Scoop: Check this blog regularly or subscribe to the RSS feed (see right sidebar)

SO YOU WANNA BE AN ACTOR?

Finally, if you’re trying to break into the acting business, sign up for our Tools 4 Actors newsletter, also in the right sidebar of this blog, or simply send a blank email to tools4actors [@] aweber [.] com (minus the spaces and brackets). The newsletter is full of tips and tools from Casting Director Lana Veenker, and it’s helpful for both beginners and seasoned actors.

NOW, on to the news: 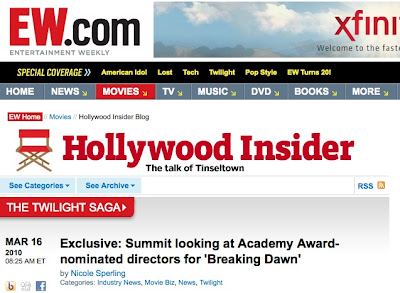 Thanks go to our friends over at the Twilight Lexicon for alerting us to this article on Entertainment Weekly:

Yes, it’s still early days, but Summit is trying to up its pedigree for its big-screen adaptation of the final installment of Stephenie Meyer’s Twilight series. Sources tell EW that the studio has reached out to at least three top-notch directors, including Sofia Coppola (Lost in Translation), Gus Van Sant (Milk), and Bill Condon (Dreamgirls) to gauge their interest in what is likely to be two movies. (Van Sant’s reps confirmed that he’s been approached, but Coppola and Condon’s people didn’t return phone calls by press time. Summit declined to comment.)

No decisions are likely to be made until the studio delivers screenwriter Melissa Rosenberg’s detailed outline to the directors. That should happen sometime next week. Until then we can just wonder how these three very diverse directors will approach Bella’s controversial birthing scene.

Be sure to also check out the Lexicon’s interesting comments about this news: 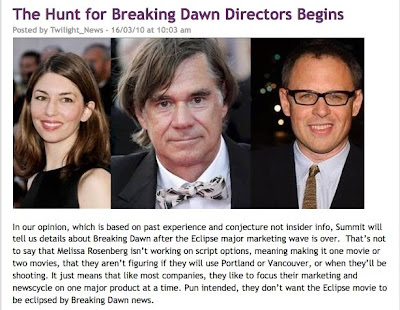 In our opinion, which is based on past experience and conjecture not insider info, Summit will tell us details about Breaking Dawn after the Eclipse major marketing wave is over. That’s not to say that Melissa Rosenberg isn’t working on script options, meaning making it one movie or two movies, that they aren’t figuring if they will use Portland or Vancouver, or when they’ll be shooting. It just means that like most companies, they like to focus their marketing and newscycle on one major product at a time. Pun intended, they don’t want the Eclipse movie to be eclipsed by Breaking Dawn news.