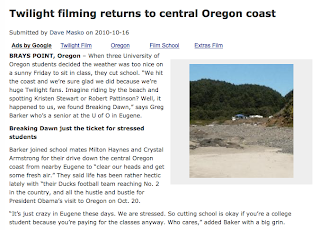 An article claiming that the “Breaking Dawn” set had been discovered on the central Oregon coast by three University of Oregon students appeared on HULIQ.com over the weekend.

BRAYS POINT, Oregon – When three University of Oregon students decided the weather was too nice on a sunny Friday to sit in class, they cut school. “We hit the coast and we’re sure glad we did because we’re huge Twilight fans. Imagine riding by the beach and spotting Kristen Stewart or Robert Pattinson? Well, it happened to us, we found Breaking Dawn,” says Greg Barker who’s a senior at the U of O in Eugene.

For more information on what we know regarding “Breaking Dawn”, check out these previous blog posts: