Just got home from the premiere of Rid of Me at Tribeca Film Festival. New York City was a blast!

Check out this glowing review of James Westby’s new film in Variety:

Bracingly original, alarming and droll, the righteously ribald “Rid of Me” should prove a breakthrough for helmer James Westby and his producer and leading lady, Katie O’Grady. Pic also offers further evidence of the remarkably innovative indie cinema being produced outside New York and Los Angeles — in this case, Portland, Ore., where the domestic meller and the horror movie have met, wed and proven fruitful. A devoted cult following seems more likely than Pacific Northwest rain, although a reasonable ad budget could mean bigger things.

Reveling in risk, Westby has his central character, Meris (O’Grady), do something so alarmingly disgusting in the flash-forward that opens the film that it’s a wonder the character recovers our sympathies. But she does: As the story proper begins, Meris, newly married to Mitch (John Keyser), is heading back with him to his Oregon hometown. He’s lost his computer company, while she’s dewy-eyed in anticipation of wedded bliss. The move is a step down for Mitch, and Mitch is a step down for Meris: When she makes him eggs benedict for breakfast, he puts ketchup on it. This is not going to end well.

The lighting is creepy, the ambience dreadful, but they don’t hold a candle to Mitch’s old friends, who welcome him warmly back into the fold while treating his new wife like a leper. The physicality of the characters underlines Meris’s outsider status: She’s tiny, they’re intimidating; she’s quiet, they’re loud. But it’s their uncharitable nature that makes them such self-satisfied monsters. No one attempts the slightest gesture to make Meris feel comfortable, and while she initially befriends her new neighbors, the Masuds (Adrienne Vogel, Melik Malkasian), she ends up snubbing them after hearing others suggest the couple might be Al Qaeda.

Matters escalate over the course of a series of dinner parties, until one evening when Meris drinks too much and blurts out something embarrassing Mitch told her not to repeat, and the die is cast. From there, O’Grady makes Meris a figure of pity, horror, revulsion and, to Mitch, profound embarrassment; in one scene at a karaoke bar, she croons a soul-scarring, cringe-inducing song of love and reproach that makes one’s skin crawl. Ultimately, the pic demonstrates, it’s not living well that’s the best revenge; it’s just sticking around.

Congrats to all involved and to Oregon film!

The Hollywood Reporter film critics’ top-10 lists are in and two of Portland’s own Gus Van Sant‘s films make the cut:

“Milk,” the biopic starring Sean Penn, and “Paranoid Park,” which we cast!

Congrats to all involved. 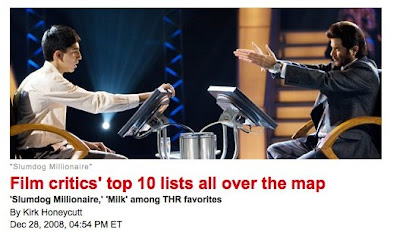 When it comes to crafting our annual Top 10 Films lists, The Hollywood Reporter’s movie critics have a time-honored tradition of casting a large and wide net, and 2008 is no exception. The picks here display an ample range of films, so much so that no single film appears on all six lists. Every list contains at least one film not found on any other list. And each critic has a different best film.

The “winning” film, appearing on five of six lists, is “Slumdog Millionaire,” Danny Boyle’s Mumbai medley of magic realism and breathtaking romanticism, which is shaping up as one of the most lionized films of 2008.

After that, it’s wonderfully wild, ranging from that head-scratcher (for some of us at least) “Synecdoche, New York” to the oldsters-as-songsters doc “Young@Heart.” Gus Van Sant’s other 2008 release, “Paranoid Park,” turns up on one list. Such little-seen films as Fatih Akin’s German-Turkish drama “The Edge of Heaven” and Werner Herzog’s documented travels to Antarctica, “Encounters at the End of the World,” make appearances.

Just got back from the West Coast premiere of “The Auteur” at OutFest in Los Angeles.

Here’s what Variety has to say about the film:

Congrats to cast and crew!

I got a call from “Valley of Light” director Brent Shields the morning after it screened on CBS with some great news: Our show knocked it out of the ballpark, with nearly 15 million viewers, beating out “The Apprentice” and every other show on television.

Here’s the email that came to me from his office:

NBC and ABC finished in a virtual tie for 2nd in all three categories.

NBC aired original episodes of THE APPRENTICE and CROSSING JORDAN while ABC had repeats of DESPERATE HOUSEWIVES and BROTHERS AND SISTERS.

This is the strongest performance for a Hallmark Hall of Fame presentation since SILVER BELLS (10.3/15) in November, 2005 and the largest audience for any movie on any network since since JESSE STONE: DEATH IN PARADISE (14,810,000 viewers) on April 30, 2006.

Congrats to all the cast and crew for a job well done!