From “Portlandia” to a new show starring Geena Davis, Portland is buzzing with TV and Film productions.  Casting Director Lana Veenker stopped by KATU’s AM Northwest with an update.

Thanks once again to Bonnie Gillespie for featuring Portland in her column The Actors Voice – POV for Showfax.com. 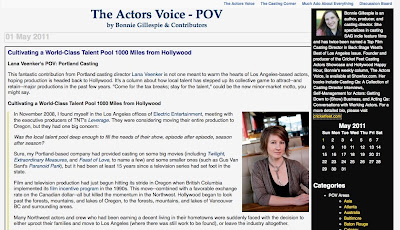 This fantastic contribution from Portland casting director Lana Veenker is not one meant to warm the hearts of Los Angeles-based actors, hoping production is headed back to Hollywood. It’s a column about how local talent has stepped up its collective game to attract–and retain–major productions in the past few years. “Come for the tax breaks; stay for the talent,” could be the new minor-market motto, you might say.

In November 2008, I found myself in the Los Angeles offices of Electric Entertainment, meeting with the executive producers of TNT’s Leverage. They were considering moving their entire production to Oregon, but they had one big concern:

Was the local talent pool deep enough to fill the needs of their show, episode after episode, season after season?

Sure, my Portland-based company had provided casting on some big movies (including Twilight, Extraordinary Measures, and Feast of Love, to name a few) and some smaller ones (such as Gus Van Sant’s Paranoid Park), but it had been at least 15 years since a television series had set foot in the state.

Film and television production had just begun hitting its stride in Oregon when British Columbia implemented its film incentive program in the 1990s. This move–combined with a favorable exchange rate on the Canadian dollar–all but killed the momentum in the Northwest. Hollywood began to look past the forests, mountains, and lakes of Oregon, to the forests, mountains, and lakes of Vancouver BC and surrounding areas.

Many Northwest actors and crew who had been earning a decent living in their hometowns were suddenly faced with the decision to either uproot their families and move to Los Angeles (where there was still work to be found), or leave the industry altogether.

The creation of film tax incentives in Oregon in 2003–along with a more equitable exchange rate–has brought many of the jobs back to the Northwest, and we’ve been rebuilding our industry ever since. So when executive producer Dean Devlin threw down the gauntlet that November afternoon, I told him (a tad boldly, in retrospect): “Absolutely. We have enough actors to cast that for you in Oregon. No problem.”

Based in part on that assertion, Leverage announced a few months later that it was coming to Oregon.

I knew what this meant to our film office, to the hundreds of crewmembers counting on these jobs, to Northwest actors searching for a reason to stay here, and to my own bottom line. I understood the financial commitment that Electric Entertainment was making–and the damage my career would sustain–if I failed to live up to my word.

I thought we had a strong enough base of actors to meet the demands of the show, but I had no idea whether or not our talent pool would truly meet their expectations, nor for how long.

My office organized a “town hall” meeting, which was attended by hundreds of Northwest actors. This time, it was my turn to throw down the gauntlet. An entire production company was moving its TV show to Portland, partly on my word. To prepare for it, I told actors, we were expanding our offices and staff, and upgrading to a new online casting system.

Now, I needed them to deliver the goods.

We challenged our talent pool to do everything in their power to up their game, whether that meant getting new headshots, assembling more professional demo reels, improving their online presence (website, IMDb, etc.), or recommitting themselves to ongoing training. I knew we had a number of actors who could compete in any market, but I was concerned that we might use them all up in our first season. I needed the next generation to step up and meet the challenge. And man, have they done so!

I can’t keep up with the number of weekly industry nights, script readings, and screening events going on in Portland, much less the countless independent films and webseries shooting around town. Our top acting coaches’ classes are filled to capacity, workshops are selling out, and it seems like every actor I encounter is in a show, penning a script, producing a short film or feature, volunteering as a reader in casting sessions, or simply focused wholeheartedly on training.

Talent agency rosters are filling out with new actors we never knew about before, and highly professional on-camera talent are hoofing it from as far away as Bend, Eugene, Ashland, and Medford to attend our casting sessions in Portland, never complaining about the commute. In my 11 years of casting in Oregon, I’ve never seen actors this motivated. And their determination is paying off.

Homegrown filmmaker James Westby–whose film Rid of Me features a cast made up almost entirely of Northwest actors–has captured the attention of the prestigious TriBeCa Film Festival (his previous made-in-Oregon feature, The Auteur, was hailed by TriBeCa organizers as “the funniest film in the festival”).

We are now in our third season of casting on Leverage, with over 38 episodes under our belts. Its producers and directors are still as thrilled as they were their first year in town, when they realized that–although they had budgeted to fly up four or five actors per episode from LA–the average (not including name actors hired to satisfy the network) was closer to one per episode. At times, none are flown in at all, local actors having snagged all the guest star and co-star roles themselves.

Since then, other pilots, films, and series have hit the Oregon Trail:

If Leverage and Portlandia continue to be successful, and Grimm and Brain Trust both get picked up, we will have four television series shooting concurrently in and around Portland.

I’ve heard the rumblings of more Hollywood films joining this wagon train in months to come, and local actors continue to lend their talents to dozens of indie projects, plays, commercials, industrials, infomercials, and voiceover gigs. In fact, more and more Northwest actors are now piecing together a fulltime living from their acting endeavors. This would have been almost unheard of just a few years back.

There’s never been a better time to be an actor in Oregon, and our actors have never impressed me as much as they have of late. Sean Hayes–one of the producers of Grimm–raved about the quality of our talent base after we had completed casting on the pilot. Gone producer André Lamal and director Heitor Dhalia did the same after our first round of callbacks. Leverage directors keep asking, “Where are you finding these people?!? How come we haven’t run out yet?”

Is there an endless pool of actors in the Northwest? Of course not. Are there categories in which I wish we had more options? Umm, yes. (Hint: if you’re a strong, non-Caucasian actor of any type–especially over 30–or a strong actor who fits the thug/bad guy or cop/security guard type, now might be a good time to hitch up your wagon and head west… or north, as the case may be). But what our actors, coaches, acting schools, independent producers, and directors have managed to accomplish over the past few years has been nothing short of remarkable:

As long as we keep endeavoring to raise the bar professionally–each generation of artists helping to groom and inspire the next–the momentum will continue and the pool will be replenished. In fact, I’ve already made it a habit to tell producers: “Give us a shot at the lead roles. I think you’ll be pleasantly surprised.”

Kudos to you, Lana, and to all the local talent keeping so many major productions so well cast and well acted! Let’s hope all actors with the opportunity to work under local hire status in other markets see this as a great time to take advantage of all the great stuff going on. Congratulations, Portland, on getting better and better! Very exciting!

Lana Veenker began her career in London as a casting assistant on international co-productions for major studios and networks. When the Portland native returned to her roots in 1999, she launched what is now the Northwest’s most successful casting company, helping to raise the bar on what producers can expect from a regional talent pool. She is a member of the Casting Society of America and the International Casting Directors Network. 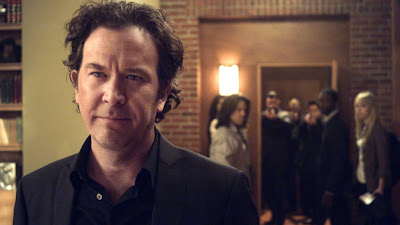 TNT announced today that it has renewed Leverage for a fourth season.

Leverage is currently averaging 4.1 million viewers in its third season, showing growth among young adult demos when compared to the second season. The series boasts a loyal following, as indicated by its strong performance in time-shifted viewing. For the first five episodes this summer, Leverage has grown its total audience by 60% when compared to live viewing (33% compared to Live + Same Day).

Leverage is executive-produced by Dean Devlin (Independence Day, TNT’s The Librarian trilogy) and creators John Rogers (Transformers) and Chris Downey (The King of Queens). The series is produced for TNT by Devlin’s Electric Entertainment.

Read the full press release at the Turner Newsroom.