A scroll through the preview page of Disney+ reveals many familiar franchises and Disney favorites. Look closely, and you’ll see “Timmy Failure” listed among the titles of originals coming soon!

We can’t wait to see this project! Mark your calendars!

KATU’s Dan Tilkin talks to Lana Veenker about a “scouting company” that recently made a stop in Portland.

PORTLAND, Ore. – A talent scouting company that recently made a stop in Portland offers to help child actors for a hefty price but a local casting director says payment upfront is a red flag.

Parents say the company, THE, pronounced “TAY,” is also using the Disney name to lure families in, but Disney says it is not affiliated with the company.

Remi Lapira and his 8-year-old daughter recently heard the company’s ad on the radio, and the company’s website features two actors, Anna Maria Perez from the movie “Fame” and Disney’s “Camp Rock 2” and David Deluise from Disney’s “Wizards of Waverly Place”.

THE’s staff members invited his daughter back (to the Crowne Plaza Hotel in Portland) for a second audition to make it to Florida.

Portland casting director, Lana Veenker who has a long resume, including work on the movie “Twilight,” said payment upfront is a red flag.

“If we were to do an open casting call for a real project, there’s never any money asked for from the parents or the kids,” she said.

KATU News called THE at its Delaware offices but a company representative said no one at the company would do an interview unless the questions were submitted in writing.

“I’m concerned for the parents who are actually shelling out that kind of money, because they think Disney is going to be the one taking them,” Lapira said.

Both Lapira and Veenker are frustrated because the company’s name makes it difficult for parents to find information about it on the Internet – typing “the” into Google returns everything.

If you have an aspiring actor in your house, go to The Casting Scoop to read more from Veenker about what to watch out for and how to get your break.

Did you guys see those prices?? UGH! 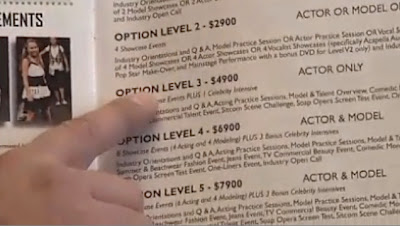 Parents: The problem here is that they’re advertising the event as a chance to meet with Disney talent scouts, not as a ploy to get people to register for a conference. If they’re trying to sell registrations for a conference, they should be up front about it and not advertise it as a casting call or a chance to be in the next Disney movie.

And there’s no reason why any conference or workshop should cost anywhere near $7900. If you’ve got that kind of cash lying around, enroll your child in a bona fide acting conservatory and sock the rest of the money away to help them get into Juilliard later. Don’t spend it on what amounts to little more than glorified lottery tickets.

Trusting your gut and doing your research
December 22, 2010

These ones were specific to Twilight, but the information on recognizing scams is still valid:

Repeat after me: All current casting calls for “Breaking Dawn” are FALSE
December 8, 2009