Many thanks to the ladies over at Twilight Lexicon, who posted about the anti-rape PSA campaign that we are producing. We appreciate you! 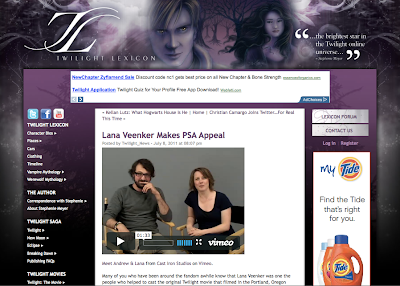 Many of you who have been around the fandom awhile know that Lana Veenker was one the people who helped to cast the original Twilight movie that filmed in the Portland, Oregon area. Lana casts many shows such as Leverage that shoot in the Portland area. For Twilight, Lana helped cast much of the local talent that was used in the film (Cora the waitress, young Bella, the original Sam Solomon Trimble, etc).

Lana is now involved in a cause that means much to her, as one of her close friends is one of the major activists in this area. More details on how you can help bring awareness to this important issue here.