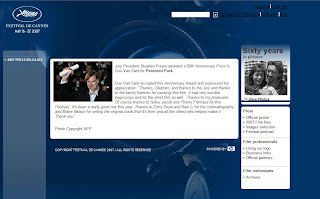 “Gus Van Sant accepted this Anniversary Award and expressed his appreciation: ‘Thanks, Stephen, and thanks to the Jury and thanks to the family Karmitz for backing this film. It had very humble beginnings and for the short film as well. Thanks to my producers. Of course thanks to Gilles Jacob and Thierry Frémaux for this Festival; it’s been a really good one this year. Thanks to Chris Doyle and Rain Li for the cinematography and Blake Nelson for writing the original book that it’s from and all the others who helped make it. Thank you.'”