I suppose it’s time for a long overdue update.

Where did I leave off? Oh yeah, “Paranoid Park.”

We’re getting closer to having a cast. No one has been booked yet, but a few favorites are starting to rise to the surface. We’ll see how it pans out.

Since then, we’ve also worked on a Nike job for Wieden + Kennedy, tied up a few loose ends on “Feast of Love,” cast a print job for Saturn Outlook, several infomercials, a few hospital spots, a home gym show and a video game commercial. Also have a handful of screenplays on my desk that I keep trying to get to. Ack.

More importantly, though, I held a fundraiser for Run for Congo Women and did my first trail run for a cause (a whopping 5.5 miles, but hey, it was HILLY and I hadn’t had time to train!). I think I raised a lot of money for the cause (thanks to all the theatre and film industry folks who sponsored me and to Toby Christensen who provided incredible healing djembe music at the shindig–you’re all so amazing!), but I still have to sit down and figure out the numbers.

The run itself was a very emotional experience, knowing that each mile I ran, several families were going to be affected. As Run for Congo Women founder Lisa Shannon put it, it was like carrying some of the burden for the people of war-torn DRC. 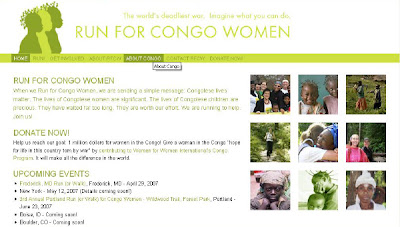 Next up on the philanthropic calendar will probably be some get-out-the-vote efforts. It’s almost that time, people! Your voice matters!