At long last, I’m poking my head back in here. Clearly, blogging is not my medium. 😐 Mea culpa.

I’ll quickly summarize the whirlwind of the past few months, so I can update you on the latest news:

We were hired to do the Oregon and Washington casting on a Morgan Freeman movie for Lakeshore Entertainment, called “Feast of Love,” based on the Charles Baxter novel. Actually, we’re still working on it. It’s been great working with the producers, crew and the very lovely Robert Benton who is directing. Just one last session this weekend and we should be about done.

Besides the regular commercial biz coming in, we did a major spot for Nike, requiring 150 talent for a night shoot at a shopping mall. Oy! I won’t even go into the craziness of that gig; I’ll just say that I bow to the producer for pulling it off with such class. If WE thought it was insanity, I can’t even imagine what HIS job was like.

We actually got FOUR whole days off on the 4th of July holiday, so that was amazing and fun. We picked up on “Feast of Love” again when we got back, finished up bookings on “The Auteur” and scrambled through several more commercial gigs, before getting a call from Gus Van Sant’s producer about casting his new film, “Paranoid Park,” based on the Blake Nelson novel.

I don’t have a lot of time to go into it now, because we’re heading into MAJOR cattle calls on August 3rd and 5th to find teens for the film, but anyone interested can check out the MySpace page we’ve set up: 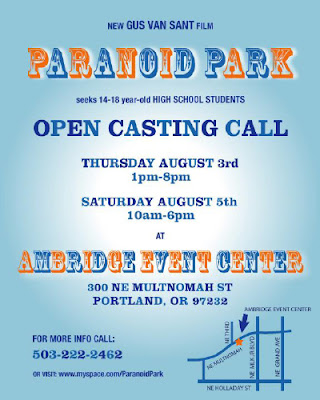 We need 14-18 year olds of all types, plus we’re going to need skateboarders 14-30 at our next cattle call on August 15th. Check it out and tell everyone you know!